The trip from Ulan-Ude south towards the Mongolian border was uneventful. The last 120 kms turned out to be the worst road in Russia I had travelled on.

The border crossing was “an experience”.
All up it took me 3,5 hours. Fortunately I was in the queue with a large number of Mongolian passport holders. All seemed to know what was required and I just followed suit: unpack everything and lay it out on the road. The Russian border guards were friendly and I wasn’t required to un-pack. Fortuitously, I was parked right behind a Mongolian family and Munkhdelger acted as a great translator, ‘middle-woman’ and mediator, especially with the rather sour Mongolian border guard. The power of the uniform …

Having presented my passport about 15 times I finally was done … that’s what I thought. But before going past the final Schlagbaum (barrier) a pimply Mongol soldier waved me over and directed me to a building. Looked like an official one and two Russian truck drivers were doing stuff in there. Wads of money (Mongols don’t have coins) changed hands and shiny certificates were exchanged in turn. Next it was my turn, but I felt reluctant to part with my dough, besides I didn’t have any Mongol money, just a few Russian Rubels. Turns out this was all about buying Mongol vehicle insurance. Now it was my turn to say “Niet!” – do have already.
Surprisingly that did the trick. 😉
Neil, a rider a few hours behind me, did not have such a lucky escape, rather had almost an argument with the same woman and ended up buying one of them shiny A4 documents.

…. and then I was in Mongolia. Finally, although the landscape in Russia was already looking Mongolian (not mongoloid, Wolfie).

It felt good. I had arrived and felt content.

The roads were better than in Russia, however that soon changed as further south I rode. I passed herds of goats, many cows and even more herds of horses, all seemingly used to stand close to the road, paying neither care nor attention to the traffic – albeit light – rushing past. Several times I had to slow-down navigating through cows/horses as we claimed the road in unison.
Now, it was late afternoon and I was glad having decided not trying to make ‘the run’ from the border to Ulaanbaatar in one go. Instead I stopped in Darkhan, about half-way, found with some difficulties the Hotel and was pleasantly surprised, a really nice one! Very friendly staff, English-speaking, nice room and they even called back the cook to make me a delicious Pizza (well, felt like something different). I could barely eat half of it. 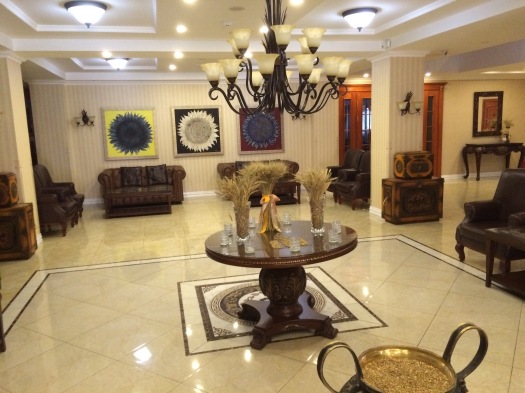 The next morning I opted for the late check-out to spend time in the lobby doing photo-uploading solutions. A seminar was happening in a room nearby and I couldn’t help noticing that the seminar leader talked to his audience for the entire morning with no response. All sitting there quietly and taking it in. A sad, cross-culture example about one-way communication, or shall I call it ‘careless unloading of information’ …. Turns out this was a 10-day workshop for secondary school teachers (in Darkhan) to learn about ‘business’, so they in turn could incorporate this content into their own curriculum.

Getting cash out of the ATM introduced me to this countries currency: the Mongol Tugrik. I ended up with a big wad of banknotes, which I hardly was able to stuff into my wallet. One Aussie $ = 1,470 Tugriks. The largest denomination of Banknotes I got was 20,000 Tugriks. Haven’t seen a bigger one yet.

Off onto the road again, it was an almost balmy 20 degrees, allowed me to shed some layers.
I had a break at a road-house, enjoyed my first Mongolian meal – lots of fat on the meat – and sat on the veranda watching the cows going past. 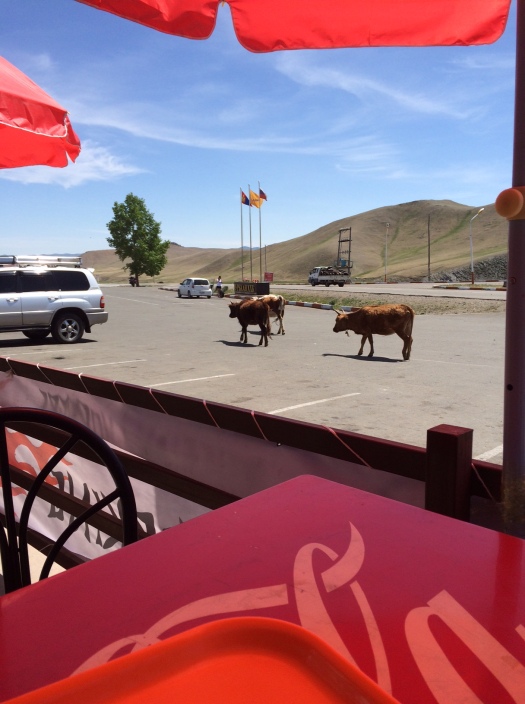 Joined by Mongol cows at the break

Arrived at Oasis Guesthouse in Ulaanbaatar (I finally figured out one form of spelling this capital’s city name). The ride lead me from the town’s west along Peace Ave, the main thoroughfare, to the town’s east in hectic stop-and-go traffic with lots of tooting and lane-swapping. I just tried to keep away from all this bustle.
The town didn’t exactly look exciting, however too early to pass judgement. 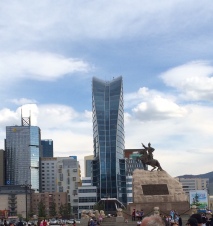 Oasis has a known name among bikers. Originally founded by a German/Austrian couple about 15 years ago it has become the ‘go-to’ point for motorcycle travellers from all corners of the globe. These days it has been taken over by a group of lovely local ladies and one couldn’t wish for a host more friendly. The one-and-only drawback is the poor Wifi connection 😦

Upon my arrival Oasis seemed securely in the hand of German travellers. We had three ‘mature’ couples in each their own, large Mobile Home. Two required a ladder to climb in, big beasts. However their owners were nothing than happy with their home-on-wheels and had travelled the globe intensively.

Arnold from northern Germany and I got on very well immediately. He had spent 7 years in Frankfurt/Niederrad whilst working at Lufthansa. So we were trading dummes Hessisches Gebabbel and had fun doing so.

There also was Hank & Marianne from the Netherlands.That was the couple Carolyn in Ulan-Ude had made me aware of – small world. On the road for many years and on their way ‘home’ to receive their new 4-wheel drive ready for their next trip. Both have build and improved their outfit bit-by-bit using their decades of experience.

Stefan, another German, had just sold his bike and was waiting for his plane to take him back home near Karlsruhe.

Stani & Marta, another young couple waited for a bearing to fix their broken down Landrover arriving via ‘special courier’ from Hamburg.

Mario from Portugal, riding with group of mates, had an incident with his R1150GS ripping of it’s left foot-mount and breaking a large chunk of the engine housing in doing so. He was trucked back ~400kms to UB and now is sorting out how to ship the bike back home.

Alastair ‘Glennfiddich, a cold-water Marine biologist from Warrnambool had arrived o his Honda Transalp and offered it for sale, soon successfully, then heading to US to meet his partner Rachel. BTW his real name is Baylis, however he’s talking about whiskey every moment and never delivers.

There was Mario, the guy I had travelled with for a few days, having arrived a day or two earlier.

Finally I also was able to put-a-face-to-a-name for Neil from Adelaide, he arrived a few hours after me.

A whole bunch of Austrians were arriving, who rode from Latvia to UB, all on Honda Transalps, already pre-sold to some locals, thus flying home sans bikes.

So this would be the place I would stay for a few days, perhaps a week, to sort out bike & tyres, insurance cards, and even the visas for the ensuing countries. I shared a room with four others and everybody got on well with each other – a bonus.

Lots of stories, possible routes, visa experiences etc etc were shared. Here is another advantage to stay I a hostel with its communal kitchen area, hence the interaction between travellers.

I decided to buy a bottle of champus (rose) and celebrated my arrival in Mongolia, together with one of my two Cuban cigars from my friend Eddie. A merry evening for self.

There is a lot of coming and going, besides that this is still the ‘pre-season’.

Liked it?? Why not sharing it?

Thanks for looking/reading. Why not leave a reply..? Cancel reply